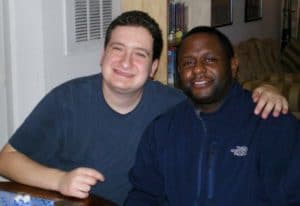 The Autism Society of North Carolina is pleased to recognize Ed McCrimmon of Durham as the 2017 winner of the John and Claudia Roman Direct Service Award for outstanding commitment to individuals with autism and their families.

Ed, who has worked for ASNC since 1999, was nominated for supporting David Wertheimer for 18 years with outstanding dedication and integrity. Alice and Pierre Wertheimer wrote in their nomination that Ed had supported their son “consistently and without interruption” through many transitions over the years. “From middle to high school, from living with us to living with roommates in an apartment, to living independently in his own condo, Ed has seen David’s metamorphosis from youngster to young man, and now on to the brink of middle age.”

The pair have an almost magical connection, David’s parents wrote. “Ed doesn’t just ‘get’ David, he enjoys David! And David enjoys Ed! Their comfort level with and trust for one another is always evident. Ed says David brightens his life and his simple joys always remind him to pay attention to them.”

Ed is an “even-tempered, soft-spoken gentleman” who is never thrown off by anything, they wrote.

“Ed stayed by David’s side through a medical crisis in 2008 that required serious surgery and lengthy hospitalization – the stuff of nightmares for parents of children with autism,” they wrote. “We are convinced that Ed’s consistent presence and his unique ability to ground David was a significant factor in David’s healing.”

Ed’s presence brings peace of mind to David’s parents, they wrote. “The commitment of 18 years – and counting! – of uninterrupted care, friendship and dedication by Ed McCrimmon to our son David, is worth more to us than money could ever buy.”

The John and Claudia Roman Direct Service Award, a cash award of $1,000, was endowed by Lori and Gregg Ireland to honor Christine Roman, the direct support professional who worked with their son, Vinnie. It was named for her parents, John and Claudia Roman. The Autism Society of North Carolina has bestowed the award for 11 years as part of its annual celebration of direct support professionals.