Chris and Debra were at Walgreens, where he works and she supports him as a job coach, when a tragic incident occurred. “My son was not 10 feet away from a man who had just shot the pharmacist and the pharmacy tech,” Bryan said. “Chris’s instinct was to run toward his co-workers to help.” 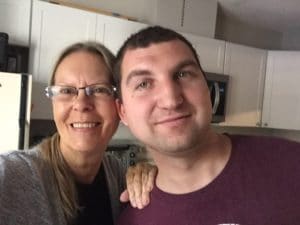 After the gunshots, “Chris immediately turned toward the pharmacy to check on his friends,” Debra said. “I had a split second to secure him.”

Debra held Chris on the floor and shielded his body with hers. “She also helped Chris stay calm while they were on lockdown until the police arrived and gave them the all-clear,” Bryan said.

Debra is more than a one-time hero, Bryan said. She is professional, caring, and competent and consistently goes above and beyond in her role as caregiver. Because of her outstanding dedication, Chris’s family nominated her for the McCrimmon Award. The McCrimmon Award is named for Ed McCrimmon, a longtime member of the Autism Society of North Carolina staff. He was known for his outstanding dedication and integrity as he served individuals with autism. Tragically, he died in 2017. The McCrimmon Award was established to keep Ed’s memory alive, and at the same time, celebrate others like him who give their heart and soul in providing critical care to individuals with autism. Dr. Rob Christian, a member of the ASNC Board of Directors, and his wife, Jennifer, made a gift so that ASNC could honor a direct support professional.

Debra, who works in the Autism Society of North Carolina’s Triangle region as an Autism Support Professional, was named the winner of the McCrimmon Award on Sept. 4.

Over the past few months, Debra has also helped Chris through the loss of his mother, Nancy. Chris wrote a letter for his mother’s Celebration of Life. When he was unable to read it aloud, Debra read it for him while he stood by her side. “This past year has been painful for him on so many levels, but he has pressed on,” she said. 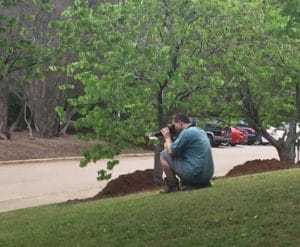 Debra, who has two adult grandchildren on the autism spectrum, has worked with Chris for three years. In that time, he has moved into his own townhouse with supporting staff. Debra is glad to know that he has reached some of his goals with the consistent and patient help of his staff. She also enjoys “watching him do what he loves – using his camera!”

Chris also loves to entertain, as his mother did, and wants to have an open house in his home for Christmas. “He’s a great host, so I will assist him in making it happen.”

Of her work, Debra says, “Is it hard? Yes! Is it worth it? Most definitely.”