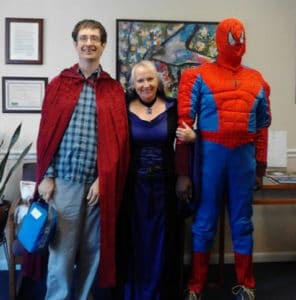 Laurie Dougherty has worked at the Fairview House, one of the Autism Society of North Carolina’s residential programs in western North Carolina, since the home opened in 2004. For her contribution to the success of the home and the residents it serves, Dougherty has been named the 2021 winner of the John and Claudia Roman Direct Service Award. The annual award honors a direct service employee of the Autism Society of North Carolina who has demonstrated outstanding dedication to individuals with autism and their families.

“Consistency, predictability, and routine are a few of the words we often use to describe what best makes autistic individuals feel safe,” says Laurie Kozar, who nominated Dougherty for the award. “With the consistency of Laurie’s involvement, her experience, and her knowledge of each individual, these men have been provided with a predictable routine, creating a successful and safe living environment.”

Michael LePage, Regional Services Director, also praises the stability that Dougherty’s 17 years of service has brought to the Fairview House. “In a world where consistency is key to success, she has been the beacon of consistency for the residents, year in and year out,” he says. “During COVID-19 restrictions, that consistency and calming presence was needed more than ever, and she rose to the occasion.”

“We have all come a long way together,” Dougherty says. “I love getting to see the residents make progress in their goals, and I get to make progress in my understanding of people with autism.”

Dougherty works to support independence for each resident, providing assistance with daily living as needed. She helps residents prepare for their days and accompanies them to activities, such as volunteering with Meals on Wheels. But the highlight, for Dougherty, is the opportunity to build friendships with and between the residents. “The social aspect is great,” she says. “We’ve all become very close, and we have so much fun.” She cites trips to the state fair and birthday picnics as highlights from past years. While COVID-19 presented challenges, she is proud of the way the residents adjusted to the changes in their schedules.

Dougherty is “the rock of the Fairview House,” according to Residential Services Coordinator Charles Steiner. “She has gone above and beyond to support not only her participants, but the guardians and her fellow staff. Her contagious positive attitude brings out the passion of her fellow staff members, and they get to witness daily her experience, dedication, and continuous drive to support her participants. She is a role model to any new or current staff.”

In her nomination, Kozar also praised Dougherty for her mentorship of new staff: “Her history is invaluable as new staff are trained in behaviors, communication, and individual needs.”

Dougherty admits she has 17 years of experience with the residents that she shares with colleagues, but she says that the Autism Society of North Carolina’s training provides the necessary foundation for new staff. She encourages anyone interested in working with people with autism to follow that calling.

“If you ever get the opportunity to work with people with autism, you should jump at it,” Dougherty says. “It’s amazing, and your life will be so enriched by the experience.”

The John and Claudia Roman Direct Service Award, a cash award of $1,000, was endowed by Lori and Gregg Ireland to honor Christine Roman, the direct support professional who worked with their son, Vinnie. It was named for her parents, John and Claudia Roman. The Autism Society of North Carolina has bestowed the award for 15 years as part of its annual celebration of direct support professionals.