Always on the Move at Camp Royall 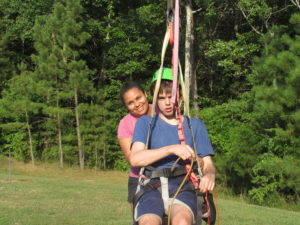 James Feller loves to be active outside. The 18-year-old, who has been coming to Camp Royall since 2014, especially enjoys hiking the camp’s trails. “I even gave him the Phenomenal Pathfinder Award because he showed me new paths to explore camp and have fun,” said his summer camp counselor, Karla Yamilette Morel.

James was always on the move this summer, checking out the horses, riding in the back of the hayride where it is less crowded, and going down the slide in the pool. That’s why Camp Royall is so good for James, said his mother, Kim. “He is looking for that physical activity. We’re not always able to provide him that same level of activity.”

James lives with his family in Cary and is starting his third year of high school. He likes the routine and structure of the school day, his mom said, just like at camp.

James did all of the summer camp activities, but on his own time, Karla said. He often finished activities early, and usually wanted to stay away from crowds. “James is a young man, so something I did to become his friend and bond with him was to respect his decisions,” Karla said. 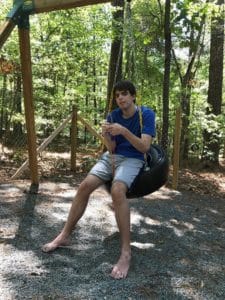 James likes to relax on the playground

When it was time to relax, James enjoyed playing on the iPad, a golf cart ride, or time in the sensory room or on the playground.

While James was relaxing at camp, his family took the opportunity to relax in South Carolina. “It was the first time that I can remember being able to read on the beach,” Kim said. “Camp Royall is the only way that we are able to have a vacation.”

She was able to relax because she knew James was happy and well cared for at Camp Royall. “They keep them (the campers) stimulated,” she said. “I think he feels safe. And he gets support.”

James’s older brother has attended Camp Royall a dozen times since he was little, but it took a while for the family to send James. They were worried that it would be too difficult for him. “We really weren’t sure that James could handle it,” Kim said.

After he had been in school for a while and was more used to being with his peers, they tried a Mini Camp. James did well! “We thought, OK, this might work,” Kim said.

Hope for his future

Since camp, James is more willing to be around large groups of people, especially if it is for an activity he knows he’ll enjoy, his mom said.

His success at Camp Royall gives his parents hope for his future when they are no longer able to care for him. “Camp does show us that he could be OK in a group home or residential setting,” Kim said. “He would be happy.”

Meanwhile, we hope to see James back at Camp Royall often. Camp Director Lesley Fraser said, “We have really enjoyed getting to know James and to see him return regularly for our year-round programs. James is loved by all of our staff. He has a unique way of seeing the world, and he reminds us all to take time to appreciate the smaller things. We feel privileged that the Fellers have allowed us to spend time with and care for James.”

Karla especially enjoyed James this summer. “James stole my heart and became one of my favorite campers and people in the world,” she said. “Camp was his space, where he could be free and do as he wanted, having a friend by his side that would have fun with him, make sure he was safe and also respecting his choices.”