The Autism Society of North Carolina held its 2018 annual conference March 23-24 in Charlotte. We will are sharing information from conference presentations in blog posts.

A panel of autism self-advocates wrapped up the 2018 Autism Society of North Carolina annual conference, bringing understanding and hope to conference attendees. 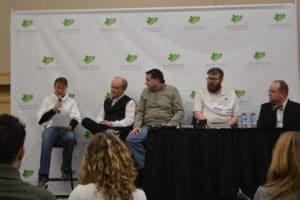 The panel members began by introducing themselves and telling a little about their lives on the spectrum. Venetta said that even though she was not diagnosed until she was 19, she always had a sense that she was different. She had friends but “didn’t really understand the other kids” and she became more socially isolated in her teen years, when friends “dumped” her one by one. Venetta, who got a bachelor’s degree in psychology, loves to learn about different conditions. “I feel like in some ways autism has really helped me,” said Venetta, who enjoys helping others with disabilities as a community coach.

Hyde, who was never formally diagnosed with Autism Spectrum Disorder, graduated from Georgia Tech in computer science so has always had good jobs, he said. Now he works from home, managing an online team but goes out a lot. Hyde said he still feels uncomfortable in social situations with a lot of people, but salsa dancing for the past five years has helped him with eye contact and confidence. He speaks to prisoners and hopes that he will be able to help others.

Following Hyde, Seman brought loud chuckles from the audience when he made it clear that he does not dance. He said he originally was diagnosed with attention deficit disorder in the mid-’80s when he was in school. After graduating high school, he served in the Air Force and then attended UNC. At UNC, he became part of TEACCH’s research into Asperger’s and received counseling. His goal is to be a resource for adults on the spectrum who are independent, coordinating events and meetups in the Charlotte area. “We’re functional, but people still have needs,” Seman said, talking about how it feels to be alone. “I’m a conduit between everybody in the community and the resources.”

Griffin said he, too, had at first been diagnosed with ADHD but was then diagnosed with ASD when he was a teenager. He talked about the importance of people on the spectrum being involved in autism organizations, likening it to when Africa was carved up by other countries in the 1870s, without any input from African nations.

The panel members then shared some insights on safety.

Venetta said it is important to teach individuals on the spectrum how to be safe. “Don’t assume a person with autism knows how to be safe. It can be difficult for us to generalize. A minor difference can throw us off.” Parents, teachers, and first responders must explicitly teach safety through all ages and levels, because individuals on the spectrum might not know some things that others seem to learn naturally. “Do not assume that one situation will teach the person for other similar situations.” Venetta said it is also helpful to encourage people with autism to ask for help when they need it.

Most of us think of crime such as getting robbed when we are asked about personal safety, Seman said. But “emotional safety can be even more devastating than personal safety,” he said. People with autism have a tendency to stay in their comfort zones, and they can feel trapped in their homes. The support groups, networking, and meetups that Seman helps coordinate can alleviate these problems and improve people’s lives. “We need to make sure we have safe harbors,” he said. “We all want to go out and do stuff and fit in. Ultimately, we all just want to be happy.”

Griffin mentioned Internet safety as an ongoing issue that affects everyone, including people on the spectrum. People must not only safeguard their private information but be careful what they share. “The record of what you do online lasts forever,” Griffin said. “Watch what you say.”

Venetta said it can be challenging for people on the spectrum to understand others because they may not be aware of nonverbal cues. Noisy social environments are especially tough because auditory processing can be a challenge. “Small talk can be difficult and tiring, especially if the other person doesn’t share the same interests I do,” she said. She shared some strategies that she has learned to help with social situations: thinking before she speaks, asking people simple questions about themselves, which makes it easier for them to open up to her; smiling and being kind; making eye contact as much as possible; and talking about favorite topics, as long as she remembers not to talk too much.

Seman said the biggest obstacle faced by independent adults on the spectrum is the social aspect. He recommended getting involved in activities, especially with others on the spectrum, to build confidence with others who understand who you are. He also stressed the role of mentorship. During school years, individuals receive lots of guidance, but after high school, they are left on their own. Seman said he would like to build a list of people on the spectrum, so people can reach out within their own geographic area for mentors.

Griffin said that he found it helpful to share his diagnosis early in dating relationships so that women would understand his differences. He used dating websites – as opposed to approaching women he met out and about – because then he knew that those women were interested in dating. For individuals on the spectrum who are seeking social relationships, Griffin mentioned that ASNC is building an online forum where people on the spectrum will be able to communicate with each other. This forum also might create the mentoring relationships that Seman seeks for adults on the spectrum.

Griffin, who works for ASNC, talked about how he started out volunteering and his hard work eventually propelled him to a full-time job in the bookstore and the IT department.

Seman, who spent 17 years working for one company in the automotive industry, said, “if you’re really good at something, people overlook your other challenges.” Then he went back to school, got his master’s, and moved into communications, where soft skills are more important. He said it can be a challenge to know whether and when to reveal a disability that is not readily apparent. It would be best to get the job without the company knowing, but individuals have to consider how much accommodation they are going to want and need, Seman said. He tries to help people know they don’t have to put it out there right away. “Nobody wants to be judged on their diagnosis.”

The audience came away from the autism self-advocates panel hopeful, knowing that although each panel member had faced challenges, they found strategies that worked for them and sought help when needed. These adults on the spectrum have careers, live independently, and enjoy social relationships. Ultimately, they are succeeding at creating lives that fulfill them as individuals.