Plan Now for the Best Summer at Camp Royall

Registration is now open for Camp Royall’s Summer Residential Camp lottery; you must complete the online registration by Feb. 28. Summer Day Camp registration is first come, first served, and begins March 1. Join us at 2 p.m. Saturday, Feb. 24, to tour camp and talk to the directors about any questions you might have about summer camp.

The right camp can help your child learn new skills, try new activities, gain confidence, and make friends! But sometimes, convincing our loved ones with autism to try a camp can be tough. Here are some ideas to get ready for camp and help you and your child have a successful experience.

Read on to hear what Camp Royall did for one family:

With four children in the house, one of whom is homeschooled, Robin Rasnake doesn’t get many chances for one-on-one time with any of them. 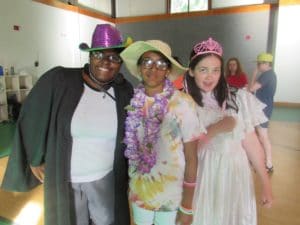 Elizabeth and friends in the gym

But last summer, her older daughter and her twin boys each spent time at Camp Royall. For John and James, 8, it was their first camp experience and their first time away from their Concord home overnight. For Elizabeth, 13, it was the first time she had gone to camp in more than six years – last time, the camp’s staff asked her family to take her home after just one night.

“We don’t have family that helps on overnights or anything like this,” Robin said. “We knew that our children were in safe hands, and we weren’t going to get a call to pick them up.”

While Elizabeth attended the camp week for her age group, Robin and her other three children spent time talking about the upcoming school year. When the twins were at camp, Robin and her daughters were able to have girls’ nights and connect without the boys around.

“To get this opportunity to spend time with just a few of the kids, where they felt individual attention, was wonderful. We also see the growth of what happens when the kids go away. We see how much more independent they can become, and it gives us hope for the future.”

Elizabeth said her favorite part of camp was making new friends among teens who were just like her. Robin said Elizabeth broke out of her shell and seemed like a different person when her family picked her up, “one that doesn’t look over her shoulder at what others are doing and knows that it is OK to be silly and have fun and not worry about what others are saying or doing.”

India Boyd, who was Elizabeth’s camp counselor, said Elizabeth was part of a group of 8-10 teens who became close during the week and stuck together as a group. 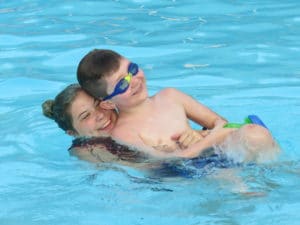 John and a counselor in the pool

John also learned that there were other kids like him in the world. “John seems to feel that no one else knows what he is going through and no one understands him,” Robin said. “He said there was another boy at camp, and he was just like him.”

John’s favorite parts of camp were the pool and playground. Since the boys have come home, Robin has noticed that they are less attached to their electronic toys. “They were thinking of creative ways to do things around the house and figuring out which board games needed to be played,” she said. 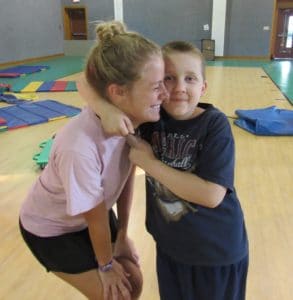 James and a counselor

James said his favorite part of camp was the playground, especially the tire swing. James overcame his fear of going in the deeper areas of the pool on the first day, and gained confidence throughout the week, said his counselor, Hannah Will. “He’s was really into trying everything.”

James learned that you can still have fun even when challenging situations occur, Robin said. James also learned that he doesn’t need her around all of the time, she said. “James is such a sweetheart,” Hannah said.

We hope the Rasnake family will enjoy many more summers at Camp Royall!

Read more stories from summer 2017 at Camp Royall in the Camp Chronicle.