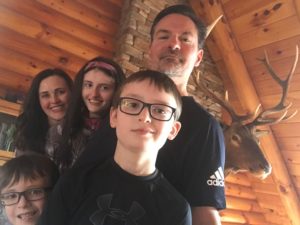 Colin Maxwell has always had a way of talking to his sister, who has autism.

“Because Kayleigh is 18, and he’s 11, he doesn’t know anything else but having a sister who has autism. He does amazing with her,” says Stephanie Maxwell, their mother. “She responds so well.”

Colin always has patience and gives Kayleigh extra time, says Stephanie, who is the Chapter Leader for ASNC’s Davie/Forsyth Chapter. “I love his heart for being there for his sister.”

Colin noticed that in his school, students sometimes did not understand children on the spectrum, so he decided educating them would be the goal of his video for the National PTA Reflections contest, which had the theme “I Will Change the World By.” His video is titled “Make the World a Better Place for People with Autism.”

“I wanted there to be extra awareness for this, because a lot of times other kids would just look at them like, ‘What?’ If they actually knew what was going on, they could be a little more nice and supportive,” Colin said.

Colin, who is in fifth grade at Vienna Elementary School in Forsyth County, spent a week creating his video at home, using multiple programs. He said he wasn’t sure how well it would do in the contest because it was his first animated video. He competed against third- through fifth-graders.

The video is about a minute and a half long and includes an explanation of stimming as well as statistics on autism. Most importantly, it includes tips for making the world a better place: Invite them to sit with you at lunch. Be nice even when they talk fast. Respect them just as you do other people. “This all starts with you. You can make a difference,” the video says.

Colin hopes his video helps people learn that “just because autistic people act differently doesn’t mean they’re not people and don’t have feelings. All it is, is their brain is wired a little differently. They take in information differently.”

Kayleigh, for example, has amazing hearing, Colin shares. “She has almost a superpower. She hears anything. You could whisper the tiniest thing and she’ll just hear you somehow.”

But that strong hearing can be stressful, Colin says; imagine walking down the street and hearing every little sound, including insects, vehicles, bicycle bells, and even your own heartbeat.

Colin’s empathy shines through as he shares this perspective. We commend him for sharing his insights with his fellow students!