Camp Royall Gives Sisters a Chance to be Themselves

The Miller sisters, Mikayla and Mackenzie, joined us at Camp Royall for the first time this summer, and they had a blast, each in their own way. 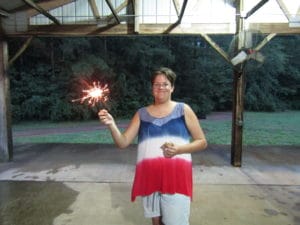 Mikayla, who is 16, shared that she was a bit nervous and didn’t know what to expect from camp, but she truly flourished. She made several really good friends during the week and has already had one over for a sleepover at her home in Mint Hill since returning from camp!

Her counselor, Abigail Foster, said she loved Mikayla’s kindness. “One day, we had drawn some characters from My Little Pony, and we had a camper who loved the show, so Mikayla chose to give that drawing to him as an act of kindness.”

Mikayla’s favorite activities seemed to be swimming in the pool, playing in the gym, and doing arts and crafts because she could spend time with her friends, Abigail said. “Especially if she is surrounded by those who care about her, she enjoys the activity more.”

Mikayla also is a very talented artist and enjoyed chances to use her creativity. For the end-of-week talent show, she displayed some of her artwork. “Her face just lit up like a Christmas tree when everyone started ooooohing and aaaahhhing,” said the sisters’ mom, Jennifer. “She was just elated!”

The talent show gives campers a boost in their confidence and self-worth, Jennifer said, and so does being on their own, away from their parents guiding them all the time. “They get a new perspective. They come back refreshed!”

“Camp Royall also gives them an opportunity to be around others with similar struggles so that they see ‘hey, it’s not just me. I am not alone.’ I think that really hit home with Mikayla … to be surrounded with people like her who she felt she could completely be herself with. That’s gold!” her mom said.

Going to camp also gave Mikayla a chance to have fun on her own, Jennifer said. “She has had to deal with a lot being the oldest. That was invaluable to me because I know she needs ‘away’ time.”

A few weeks after Mikayla went to camp, it was Mackenz 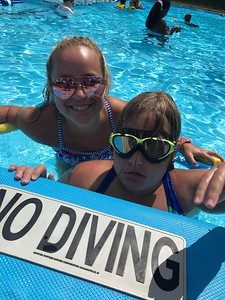 Mackenzie, who is 10, is an extrovert and a thrill-seeker, her mom said. At camp, she jumped right into the pool the first time she went, and she loved flying high on the tire swing.

“Mackenzie love, love, loves the gym!” said her counselor, Tori Sedlock. “Whenever we get in there, she is happy as can be! She especially loves to run around, throw the basketball with me, and greet her friends.”

Mackenzie was always positive, Tori said. Even on a rainy day, Mackenzie just splashed in puddles and giggled, acting silly. “I cannot help but laugh along with her when she laughs! She laughs when we are in the pool, when I tickle her, and any chance she gets,” Tori said. “She is such a happy girl and makes everyone at camp so happy too!”

Jennifer said she was thrilled that Mackenzie did so well at camp, her first time sleeping away from her family. “She was exposed to something completely different and new. Mama wasn’t around … Mikayla wasn’t around … and she thrived! I know it did her so much good, and I know between the two girls, she was challenged the most. I’m very proud of her. Of them both.”

Camp Royall also gave Jennifer a rare chance to spend time alone and bond with Mikayla. “But the best part is, Mackenzie was having fun too, at the same time! And to have things balanced like this is awesome! I could genuinely enjoy them both this summer during their ‘own’ time with Mama. I wouldn’t have had that opportunity if it wasn’t for Camp Royall.”

“Camp Royall is a place where these kids are celebrated, not tolerated. That’s priceless to us families,” Jennifer said. “I will truly have a peace of mind sending them there again.”

We hope both Mackenzie and Mikayla will join us many more times at Camp Royall in coming years!

For more stories about our summer at Camp Royall, check out this year’s Chronicle magazine.