Dr. Laura Politte of UNC and the Carolina Institute for Developmental Disabilities presented on “Recognizing and Treating Common Co-Occurring Medical Problems in ASD” on Saturday, March 23, at the Autism Society of North Carolina’s annual conference in Charlotte. For those who were not able to attend her presentation, we are sharing some of the highlights here. 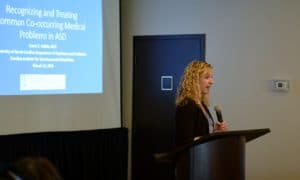 Dr. Politte began by sharing some key points. For individuals with autism, a change in behavior may signal a medical problem, and so they should be assessed for physical problems. Difficulties with communication may mean that they express discomfort in unique ways. Some medical problems are more common in individuals with autism than in neurotypical individuals, and some commonly used medications can cause other problems. Providers should partner with parents and listen to them when assessing an issue; parents know their children best, Dr. Politte said.

She then shared some signs of an underlying physical problem:

Individuals on the autism spectrum are more likely to have gastrointestinal problems than the general population. Dr. Politte said the prevalence is probably about 40 percent; studies put it anywhere from 23 to 70 percent.

Their symptoms are primarily functional, meaning that their GI systems look normal but do not function properly. The most common gastrointestinal problems are general GI problems, constipation, diarrhea, and abdominal pain. The severity of their gastrointestinal symptoms are associated with the severity of their autism symptoms. They experience chronic abdominal pain associated with anxiety and sensory over-responsiveness, sending them into a terrible loop in which one thing affects the other.

Food allergies also seem to be more common among individuals on the autism spectrum. Individuals with gastrointestinal problems can also experience increased psychiatric symptoms, such as anxiety, self-injury, aggression, and sleep disturbances.

Many factors may contribute to constipation and abdominal pain for individuals with autism. They may have a selective, low-fiber diet or have sensory issues that keep them from defecating. Medications they take may cause constipation. They also may have gut dysbiosis, meaning the microbes in their gastrointestinal tract is out of balance, or gut dysmotility, meaning the parts of the gut do not work properly to move food through the body.

Gastrointestinal problems can be hard to diagnose, Dr. Politte said, especially for individuals who have communication impairment or sensory-processing differences. Some behaviors that may signal GI discomfort include:

Dr. Politte noted that because the prevalence for gastrointestinal problems is so high, caregivers and providers should be quick to check for them if behavior changes.

Treatment of constipation or functional abdominal pain is the same for individuals with ASD as for other individuals, Dr. Politte said. Research is ongoing, but evidence is insufficient to draw conclusions, she said. She did share some results while noting that the studies have been small and have lacked control groups and standardized outcome measures.

Studies of probiotic/prebiotic supplementation have reported significant improvement in GI symptoms including constipation, diarrhea, and abdominal pain. More study is needed to determine optimal species, strain, and dose, she said. Additionally, the supplements may need to be individualized because everyone has a different microbiome, or ecosystem of microbes in their gut.

Studies of dietary interventions have been less conclusive. Omega-3 supplementation showed no effect on challenging behavior or ASD symptoms. Digestive enzymes showed mixed results in two studies. For gluten-free/casein-free diets, parents reported benefits for communication and behavior, but investigators said they saw no improvement in GI symptoms. Again, the studies were small, short in time, and not standardized, so Dr. Politte said it was difficult to draw conclusions.

In one study of microbiota transfer therapy, 18 children ages 7-16 were given an antibiotic to wipe out their microbes, their bowels were prepped, and then they received a fecal transfer. Researchers noted an 80 percent reduction in GI symptoms, a significant improvement in ASD symptoms, and a normalization of gut microbiota. In fact, benefits were maintained eight weeks after stopping the treatment. Dr. Politte said the study was small but results were encouraging, and more research is underway.

Obesity or being overweight

About 40 percent of children on the autism spectrum, ages 10-17, are overweight or obese, compared to 32 percent of typical children. Factors that may contribute to this problem for people with autism are a limited diet, decreased physical activity, use of edible reinforcers, side effects of medicine, sleep problems, and increased screen time, Dr. Politte said.

To prevent obesity or manage it, she suggested the following measures:

Seizures are not always obvious, Dr. Politte said. Some behaviors that may suggest the individual is experiencing seizures are staring spells, sudden stopping of activity or unresponsiveness, eye-fluttering or deviation, repetitive behavior that appears rhythmic or unilateral, and a behavioral change followed by confusion or drowsiness.

For individuals with autism, seizures are treated with the same medicine as for neurotypical individuals. But caregivers and providers must take into consideration the side effects of anti-convulsants, especially when managing other conditions. They may affect cognitive abilities, mood, and alertness.

Individuals with autism commonly have difficulties with sleep onset, maintenance, and early awakening. These problems can affect behavior, cognition, and attention. Sleep problems also are associated with increased hyperactivity and repetitive behaviors. In turn, this all negatively affects parents’ sleep and causes family stress.

When evaluating sleep problems, she suggested collecting some key data:

To treat sleep problems, Dr. Politte taking the following steps in this order:

Laura Politte, MD, is an Assistant Professor of Psychiatry and Pediatrics at the Carolina Institute for Developmental Disabilities. She received her bachelor’s and medical degrees from UNC Chapel Hill and then completed residencies at Massachusetts General Hospital and McLean Hospital. Dr. Politte also worked at the Lurie Center for Autism, where she was a clinician and co-investigator for several clinical trials. Current research interests include psychopharm clinical trials and new drug options for Autism Spectrum Disorder.