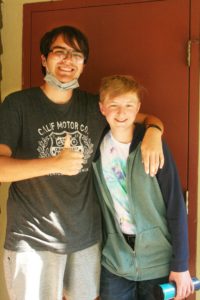 Grant Clark first attended Camp Royall in 2012 as a camper. That summer, he decided that he would return one day as a counselor. This year, he fulfilled that promise.

“It’s been really special seeing the other side of things, to see how much effort goes into making sure that these campers have an amazing week,” he said. “I had an incredible counselor who made that week really special for me, and now I’m doing activities with the campers that I remember my counselor doing with me.”

Grant’s favorite activity when he was a camper was boating. He made friendships that summer that have lasted to this day.

“I met so many amazing guys that summer, and now I’m meeting incredible campers,” Grant said. “I’ve had a really special bond with every single one of my campers. Maybe it’s because I’m on the spectrum like they are, but we’re able to bond over shared interests and form a friendship.” 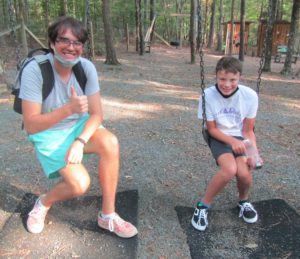 While Grant worked hard to ensure that campers had their “best week ever,” he also had fun. “This job is awesome,” he said. “Getting to spend time outdoors is always nice, but then you get to make connections, not just with campers, but with the directors and your fellow counselors. It’s really something I’ve never experienced before.”

Grant is a student at Queens University of Charlotte, where he’s majoring in archeology and minoring in Latin. He hopes to pursue a Ph.D. in archeology and work in Rome, Italy one day. Still, he’s willing to make the flight from Rome to Camp Royall.