What’s Speech Got to Do with It?

When I was studying to be a doctor in India, in the third year of my 51/2 year course of homeopathic medical science, I read about “autism.” I did not react to it much as I thought (just as anyone might), “Wow, what a terrible challenge, wonder how folks who have it cope and deal with it?” Oh well…a few moments later… I had moved on … to something else … without thinking that this word “autism” was going to change my life forever.

About a decade later, I heard the word again when I was least prepared for it. It was in reference to my firstborn! By this time I had gotten married, migrated to the United States, and had two beautiful boys. I had started clearing exams that would pave the way for me to practice as a doctor. It was as simple and clear in my mind as opening my eyes and seeing light.

But wait, how could it happen to our family? What went wrong? Did I do something to cause it? Can it be fixed? What does it entail in the near and distant future? What should I do? Denial, shock, grief, fear, anger, pain – an emotional roller coaster that kept going! 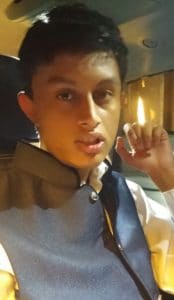 When the word “autism” was uttered by the therapist, the rest of the conversation was as if there was no sound. It was like they show on TV. All of the other words faded away in response to that one word that was going to change the course of my life!

Since my husband and I are originally from India, it seemed only natural for us to go and get our son reevaluated by the top pediatricians and neurologists in India. But we got the same diagnosis over and over again. The language spoken was different, but what I realized was the impact it was going to have on our family was pretty much the same as any family that deals with the news of “autism.” Some say it was as if they heard the news of something dying. Some say they experienced major disbelief and disappointment. Some stay in shock for years and go into depression. For many, it is a mixture of all of these emotions over time.

What we realized was of course ”autism” was challenging and full of struggles for our family, but we also as a family got to know his world, which was very different than ours. 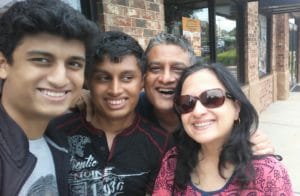 I think his world was simple, beautiful, pristine, and free of clutter and chaos, free of manipulation, free of artificial-ness and manipulations that we adults imbibe growing up. And I loved it for him, but I also had to realize he was growing up in “our” world and would be interacting with one of us….all his life.

The goal then became to not change much of his world as there was nothing wrong with that, but to invite small things into his so he is vigilant and perceptive of that.

My son is 20 years old now. He is still “non-speaking” but has come a long way from where we started. He continues to be the brightest part of my day, the biggest blessing in my life, the sweetest joy there is. He gives the warmest hugs and brightens up my day, no matter what.

He thrives in environments like the swimming pool, horseback riding sessions, a bowling alley, or a music program. All of these places don’t require him to speak his words. Sports and music require no language, hence he thrives.

He volunteers at two sites in the community even though he is profoundly impacted by his autism. The first is a local spa, where I would go to get my nails done and see a basket of towels. I would think to myself, “If only my son could have an opportunity to come fold these towels in this environment,” which was very different from the home environment where I would make him practice this skill over and over. When I approached the manager, the answer was NO, as they had to abide by the “state board regulations” and all. When I insisted and kept at it, the manager finally agreed to try it out for a couple of weeks. About six months later, my son still goes to the spa for half an hour twice a week and folds towels. He gives everyone a high five and makes eye contact when he goes. Everyone knows him and supports him. 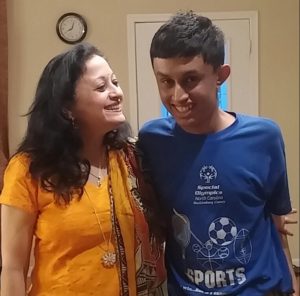 The other place he volunteers is a convenience store run by a nice Indian couple. All I had to do was ask them whether my son could come with his worker and dust shelves, stock them, and do light work. He is very welcome there, and these folks have been very warm and considerate.

Even though my son cannot use language or words, he still has a lot to offer to this world through his hard working and pleasing attitude. He is learning to follow directions and visual schedules, and he is gradually expanding the number of people in his life who love, support, and are rooting for him.

Although the Indian culture I came from was very different from the American culture I ended up in, I believe that the culture of autism is universal and does not discriminate. Language or no language, it has a message of its own: “We might be appear different, but are definitely not less.”

And while our lives maybe different than I pictured, I am learning every day that I’m blessed with more, not less.

Shagun Gaur, an Autism Resource Specialist in the Charlotte region, can be reached at sgaur@autismsociety-nc.org or 704-894-9678.