Registration is now open for our 2018 Day Camps at Camp Royall and in Eastern NC (Newport, Wilmington, Winterville, and Brunswick and Onslow counties).

The right camp can help your child learn new skills, try new activities, gain confidence, and make friends! But sometimes, convincing our loved ones with autism to try a camp can be tough. Here are some ideas to get ready for camp and help you and your child have a successful experience.

Read on to hear how one 9-year-old soared at Day Camp: 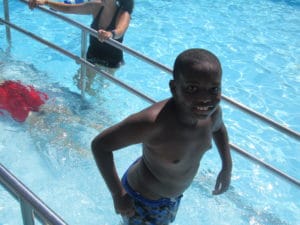 Nolan Carson runs toward the pool – not too fast – looking over his shoulder to make sure his counselor is following him. He is, and so Nolan jumps in, a big grin on his face.

Soon, the 9-year-old has recruited two other boys to join him as well, all of them jogging up to the edge and taking small jumps off the side. When one of the boys stops and wanders away to the other side of the pool, Nolan brings him back to the game.

It is a scene you might find at any camp, but at Camp Royall, it means so much more. Camp Royall gives Nolan a chance to interact with other children and develop friendships, his mom said.

“The Camp Royall experience has changed Nolan’s whole self-concept and his sense of who he is and what he can do,” Angela Carson said. “He is engaging in more teamwork activities. His interaction with the world around him in everyday settings has increased and improved.”

This was Nolan’s second year of attending Day Camp, where his counselor, Sam Hedges, says he has been really outgoing and loves to lead activities, especially in the music room and at Shady Circle. His mom said even at home, he loves to sing, dance, and put on “one-man shows.”

“If you ask Nolan what he can do, he can go on for several minutes,” Angela said. “His response when you ask him what he can’t do is, ‘I can do everything!!’” 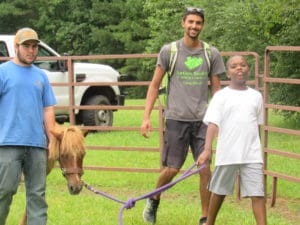 “Camp Royall has increased Nolan’s confidence, independence, and willingness to try new things,” his mom said. “I can tell that he feels valued for his contribution.”

Sam said that as Nolan’s first week at camp progressed, he became more comfortable and interacted more with the other campers.

Nolan also has recently expressed his love for nature, his mom said, so the hiking trails at Camp Royall are another favorite. On a recent day, he was one of the first day campers to clean up his snack when asked and head off on the hike with his counselor.

“Camp Royall has created happy memories that will stay with Nolan throughout his life,” his mom said. “It gave me a peace of mind, knowing that Nolan was in a safe, loving, and supervised environment.”

Camp Director Lesley Fraser said the staff had enjoyed having Nolan for three weeks this summer.

“Each week he has brought so much joy and energy to camp, making it a better place for everyone around him,” Lesley said. “The Day Camp counselors at Camp Royall are used to seeing campers return week to week, which is a big part of the why they love their jobs. Counselors are often requesting to be with their favorite campers again and again, and Nolan is certainly one who is always in high demand! As we continue to get to know Nolan, and Nolan continues to get to know Camp, his growth in confidence, friendships, and fun are always very clear.”

We hope Nolan will return to make more memories for years to come!

Read more stories from summer 2017 at Camp Royall in the Camp Chronicle.