Focus on Strategies for Anxiety at Annual Conference 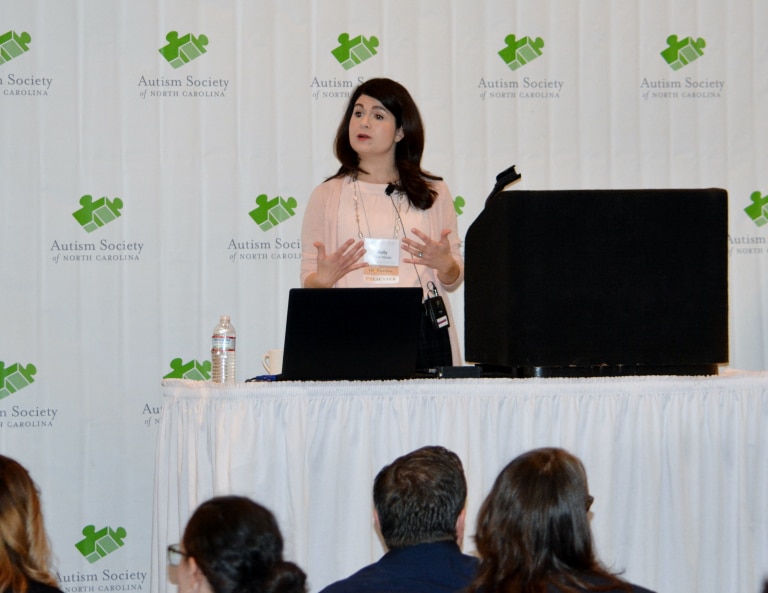 The Autism Society of North Carolina held its annual conference March 24-25 in Charlotte. We will be sharing information from conference presentations in upcoming blog posts.

Holly Blanc Moses, a Board Certified Behavior Analyst, Licensed Professional Counselor, and Licensed Psychological Associate, gave a presentation titled “Autism and Anxiety: Strategies that Work” on the second day of the conference. Ms. Moses began by reminding her audience that everyone experiences anxiety at some point in their lives and listed several indicators: rigidity, oppositional behavior, unresponsiveness to reason, excessive emotional reaction, resistance to transition, excessive avoidance of harmless events/objects, excessive need to control others or the environment, confusion, frustration, and frequent question-asking. Anxiety can even manifest in physical symptoms including shortness of breath, rapid heart rate, muscle tension, headaches, and stomach pain.

It is estimated that up to 40 percent of individuals with autism may have a co-diagnosis of anxiety that can worsen their social challenges, increase their challenging behaviors, and generally reduce the scope of the world in which the person with autism interacts. Individuals with autism will usually have difficulty communicating their anxiety. As a result, their caregivers will often misinterpret their anxiety as bad behavior, applying labels such as “defiance” or “aggression.” Attempts to discipline the “bad behavior” will likely lead to one of three unproductive responses: avoidance or escape, fighting back, or shutting down.

The triggers for anxiety in individuals with autism are what Ms. Moses labels “heavy stuff”: expectations to tolerate difficult moments, to be social, to do homework, to please teachers and parents, to maintain self-care and complete chores; as well as unexpected changes. A patient of hers described his reaction to the heavy stuff as “I feel like I’m on fire,” and another noted “People like us don’t know how we fit in this world.” The focus of her therapy when working with these individuals is to find ways to lighten the load of the heavy stuff.

Ms. Moses explained that she tries not to minimize what her patients say; she dislikes common counselor questions such as “Is that a big problem or a little problem?” since it all feels “heavy” to these patients. She gave her audience a brief quiz by tossing out simple words and having the audience quickly respond “good” or “bad” to label each word; most found it very easy to identify words such as “happy” as being “good” versus “sad” which is “bad.” But Ms. Moses explained that her patients with autism and anxiety may struggle to apply such simple labels. She tries to work on their terms by keeping two small balls nearby; one is lightweight, soft, and fuzzy; the other is heavy, hard, and wooden. Patients can select a ball to respond to a word she gives by indicating how that word makes them feel, rather than by giving it a good or bad label.

Ms. Moses likes to use the phrase “My brain is telling me a story that…” and encourage patients to finish the sentence. Often the patient chooses a heavy or “stuck” thought such as “everyone hates me” or “I don’t do anything right” or “I stay in my room so I don’t have to monitor so many people” (these are actual responses gleaned from young patients, male and female). Ms. Moses then works to help the patient lighten the load of these heavy thoughts and getting them “unstuck” by helping the patient to interpret their brain story in a more positive way.

Ms. Moses then outlined two cases, beginning with Jack, a 10-year-old with ASD and anxiety who had an intense fear of mascots. Ironically, he loved the concept of mascots and had memorized the mascots associated with major league teams around the country and even talked about becoming one. But his fear meant that his family avoided fun outings such as ball games and had had to constantly surveil stores and restaurants for mascots before taking Jack inside. Jack also avoided social interaction with his peers and a schoolwide reward program. Her plan for Jack was based on social-skills training in session and during lunch and recess at school, systematic exposure to mascots (she emphasized that this type of exposure must be directed by a professional), and a system of rewards (reinforced at home) for school participation. The social-skills training involved four phases beginning with a group of a dozen or so students whom Jack pre-approved; no students knew that Jack was the target of the sessions. Conversation topics were also identified in advance, and students were encouraged to answer questions with short one- to two-word responses. In the second phase, Ms. Moses added some students that Jack didn’t pre-approve and encouraged full-sentence answers. In the third phase, the ratio of known to unknown students was about 50:50, and longer conversations were encouraged (three exchanges per question). Finally, the 50:50 ratio was maintained but the topics were pre-identified only for the first two exchanges; students were instructed to both ask questions and make comments. She tracked Jack’s contribution to each session, which rose from 3% to 70%. Best of all, when the sessions ended, Jack hugged a mascot and attended a sports event with his family that included a mascot.

Dave was a 13-year-old with ASD and anxiety; he dealt with his anxiety by running from the room and had engaged in self-injurious behavior severe enough to lead to multiple hospitalizations. He also had not-so-cool ways to try to engage his peers, such as breaking into a rap song in the middle of class. Ms. Moses’ plan for Dave included trying to make room for what he called his “brain trains” (the “heavy stuff”) by understanding that they will arrive whether we want them or not, and encouraging him to jot down his brain trains to discuss in sessions. She also developed a school behavior plan to include a signal to the teacher requesting a break in the hallway for up to five minutes and two to three daily check-ins with the school counselor. Ms. Moses worked to further educate both the teacher and Dave’s parents about autism; this included training his mother to give more effective instructions, especially for transitions. And finally, Ms. Moses added social-skills training, which encouraged Dave to engage with students with similar interests and helped him learn to be more effective at giving compliments. Over time, Dave made friends, acquired his first girlfriend, and engaged in school activities including Math Olympics, bowling team, football team manager, and theater.

Ms. Moses concluded her presentation with some quick tips, beginning with “Make Time Visual.” Time can be very hard for those with autism to conceptualize leading to complaints such as “This is gonna take forever!” or “Whatta you mean it’s time to quit?” Keep a colorful timer nearby. Another tip is “Make Life Visual” with pictorial (or text as the child ages) schedules, homework goals, reward systems, etc. Praise successes, especially if you notice more calmness with your child in challenging situations. Gradually expose him/her to feared events or objects. Use clear one- or two-step instructions, and always be sure the goals you’ve set are genuinely reachable.

Holly Blanc Moses, MS, BCBA, LPC, LPA, of Crossvine Clinical Group, PLLC, in Raleigh, has more than 19 years of experience in working with individuals with autism and developing strategies to assist them.