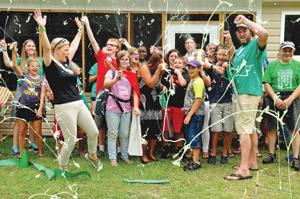 The Autism Society of North Carolina and Trillium Health Resources hosted a ribbon cutting ceremony Friday for the new center at 115 Roberts Road.

The center serves those diagnosed with autism and other intellectual and developmental disabilities between the ages of 4 and 22, from Carteret and Craven counties. The main focus will be on those with autism.

The center, which is housed in a 3,500 square-foot facility, has a kitchen, activity room, sensory room, music and movement rooms, an arts and crafts room, three offices, two restrooms with several stalls and storage areas. It also has a large fenced-in yard with play equipment for children.

While the ribbon cutting was Friday, the center officially opened on the Fourth of July by offering a free six-week summer day camp for nearly 30 autistic youth. The camp ends mid-August.

The center will also begin offering free after-school programs in September, with plans to offer services to autistic adults beginning in the winter, according to the center’s director, Joey Reynolds.

“We have a lot planned in the future, like offering mini camps on Saturdays, but we’ll gradually phase in programs,” she said.

Registration for the center’s after school program began Friday. Ms. Reynolds said once the 30-student cap is met, she will create a waiting list.

Parents of autistic children, like Bud Samples of Beaufort, who has a 12-year-old autistic son, said the center provides a valuable resource to families.

“We’ve never really had any help before,” he said with tears in his eyes during the opening ceremony. “Every year at school it’s been a battle, and most teachers aren’t really trained to handle autistic children.”

He said since his son, Parker, has started the camp, “things have completely turned around. Everyday he gets up and can’t wait to come to the camp.”

Ms. Reynolds said the center has 26 seasonal staff members, with four full-time staff. There are counselors, a program coordinator and director. She said all those who work at the center are trained in first aid and CPR and are certified to give medications to children.

The Autism Society of North Carolina will offer the programming at the center. Trillium Health Resources, a care manager for individuals with substance use, mental illness and intellectual and developmental disabilities in 24 counties in eastern North Carolina, is providing grant funding for the camp and center operations.

The Newport center is one of four opening in eastern North Carolina.

“We are excited to partner with Trillium Health Resources to bring these services to the region,” said Sara Gage, Social Recreation Program Director for the Autism Society of North Carolina. “It’s wonderful to be able to provide life-improving programming for individuals with autism and other diagnoses. More importantly, we are helping people who otherwise would not receive services.”

“Trillium is thrilled to partner with the Autism Society of North Carolina and reinvest in our communities. Social and educational experiences like these allow participants to thrive in an environment where they can interact with peers and gain a sense of independence,” said Trillium Project Coordinator Amy Corbitt. “These programs will offer individuals with intellectual (and) developmental disabilities new opportunities to participate and feel involved.”

Autism Spectrum Disorder is a lifelong developmental disability that typically appears during the first three years of life. A prevalence study by the Center for Disease Control indicates as many as one in 59 8-year-old children in North Carolina may be diagnosed with autism.

According to statistics from the State Department of Public Instruction, there were 115 students diagnosed with autism attending county public schools in 2015-16. There were 293 autistic students attending Craven County schools.

The number of autistic children in the state has tripled over the last 10 years, according to David Laxton, director of communications with the Autism Society of North Carolina. Statewide there were 16,275 students diagnosed with autism attending public schools. That number doesn’t include students attending private, charter and home schools.