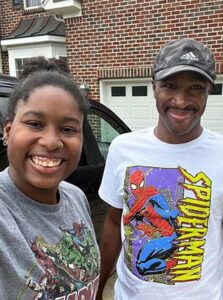 Direct support professionals often become honorary members of the families they work with because of their presence during highs and lows, good times and bad. MeKayla Sheene began working with Casey Drakeford in May 2022, less than two weeks before his mother’s death. For consistently going above and beyond during this difficult time in Casey’s life, Sheene is the 2022 winner of the John and Claudia Roman Direct Service Award. This annual award honors a direct service employee of the Autism Society of North Carolina who demonstrates outstanding dedication to individuals with autism and their families.

“MeKayla’s work during a tumultuous time made her a true friend to Casey, but her positivity, love, and dedication has had a positive impact on his family as well,” said Autism Services Coordinator Laura Belmar-Ramos, Sheene’s supervisor.

Casey’s mom was his best friend and biggest advocate, and her death was the first time Casey lost a loved one. Sheene supported Casey during his final hospital visit to see his mother and was there for him when he received the news she died. She helped Casey navigate his grief by using social narratives, answering his questions, and being there as he expressed his emotions and talked about his mom. Her presence was comforting and uplifting for Casey as well as his family.

Sheene has also supported Casey through the first milestone occasions without his mother. For his parents’ wedding anniversary, Sheene helped Casey get a special gift for his father and write a card. For his first birthday without his mother, she organized a visit to Wake Forest Comic Con, because Casey is passionate about superheroes and action figures. The family reported that it was Casey’s best birthday in several years.

“I just love Casey the best I can,” Sheene said of supporting Casey through his grief, noting that she received help and advice from Belmar-Ramos about how to best support Casey as well as support from her church. She also drew on her psychology degree.

“MeKayla has been a standout staff member,” said Belmar-Ramos. “She truly brings her best self each day. Even if this hadn’t been Casey’s most challenging year to date, it’s clear that MeKayla would’ve been just as supportive. She is an incredible friend to Casey and helps advocate for him day after day across all settings.”

“I love all the little things that make Casey who he is,” said Sheene, describing the excitement he has for his job at the Southeastern Baptist Theological Seminary’s library, his fondness for singing along to Disney music in the car, and of course, his detailed knowledge of action figures. A typical week for the two also includes working on skills in the home, exercising at a local gym, and cooking treats to share with his coworkers. “My favorite part of the job is hanging out with Casey,” she said.

For Casey and his family, that friendship means the world.

“There are not enough words to describe the ways in which MeKayla has made a difference in Casey’s life during such a challenging year,” said Bill Drakeford, Casey’s father. “In a short time, she has proven a reliable and caring staff that always follows through.”