After a day of rushing around from therapy to therapy, I pulled into the driveway to see something written in a primitive-looking chalk square on the concrete pad in front of our garage. I parked the van in the garage and went back out to read the important message I had just driven over. 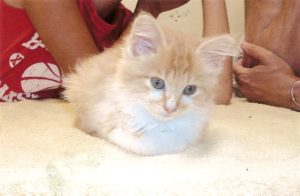 The color of the chalk keyed me in to the importance of the message. For my son, Paul, blue has always been sacred. Over the years, I have become attuned to the significance of blue. NEW CAT COMING SOON was written in capitals with bright blue chalk and surrounded by a lopsided box. It was an important sign, announcing a joyous occasion to our neighbors.

As part of his autism, Paul has always had some language but lagged way behind his neuro-typical peers and also behind some of his classmates with high-functioning autism. This blessing of language has also created a lot of difficulties for him. Many people have falsely assumed that because he can talk sometimes, he can always express his needs and emotions appropriately. Over the years when spoken words have been too strenuous, Paul has found ways to let people know the depth of his joy and how much he disapproves.

Another example of this expressive language challenge occurred a few months earlier, when our van was beginning to cost more in repair than what it was worth. After much research, my husband decided on a new Honda Odyssey. To win Paul’s approval, we chose blue, which had been his favorite color since he was a toddler.

A couple of days later when I was rushing to take Paul to school, I was greeted by a homemade sign with the words “OUT OF ORDER” scribbled in blue crayon on a piece of printer paper and taped to the driver’s side window. Unable to express with words his intense distaste for the new van, Paul communicated exactly what he felt with the sign. “Out of Order” meant something couldn’t be used; it didn’t work. The new van did not work for Paul. Begrudgingly, he did as he was told and climbed into his car seat. In time, he began to appreciate the new van, but he still liked the old one better.

I miss my cat

But back to the kitty story. Before Paul’s verbal block showed itself in the sidewalk chalk sign, our dear old kitty, Hunter, passed away. The thin stray male tiger had adopted us when Paul was five. The stray had found a family who loved him and took very good care of him. Hunter passed on lying on the cozy couch during a nice relaxing nap on a frosty morning.

Paul did not cry, but showed how much he missed his first real pet though pictures and a note: I miss my cat. He announced to others that his cat was gone, but stuck to the facts of Hunter’s life.

Then over the next months, we looked for the right time to get a replacement. Paul was very patient in this process. Several reasonable deadlines passed: Wait until spring when the cat can be outside more. How about after we take our summer vacation? Throughout the summer, no strays visited our neighborhood – our usual means of adoption. Then a call from my brother led to our rescue of a very tiny, abandoned kitten from his farm.

Paul learned about the new addition by overhearing my conversation with Uncle Alan.  With a series of statements, Paul gathered more information: “The new cat will need a name. I will let him sleep in my room on the bottom bunk because he is small. He will be brown striped, just like Hunter.”

Even though Paul had not asked any questions, I knew he was wondering about our new arrival. I helped him ask his questions, then answered as best I could, having not seen the cat. The next few days would be filled with important decisions, such as deciding a fitting name. Although he did not express his excitement when sharing the great news with others, he obviously did feel a building level of joy. NEW CAT COMING SOON!!

This story was written over 10 years ago, and sadly, the new cat has passed on. New cats have taken his place, and blue is no longer the most important color, but Paul still struggles to express himself verbally when experiences are too exciting or raw. He is not alone with this. For many individuals on the spectrum, it illustrates the impact of emotions and anxiety on their ability to speak. Some individuals with ASD who are normally verbal can suddenly lose their ability to speak. This can catch their listening partner off guard. For the person with ASD, this sudden inability to talk can be embarrassing. Being able to put thoughts or feelings in writing or pictures can be a wonderful way to get those strong feelings out safely and also to let others know about a situation that cannot be adequately expressed through words.

Nancy Nestor, an Autism Resource Specialist in the Charlotte region, can be reached at nnestor@autismsociety-nc.org or 704-894-9678.