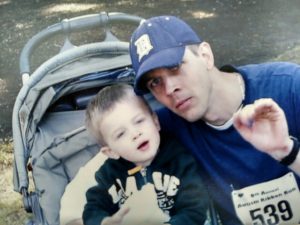 The Kidd family hasn’t missed a single Triangle Run/Walk for Autism since 2007, the year Greyson was diagnosed.

Greyson was just 2 when he was diagnosed. He did not speak much or know how to interact with people. He exhibited a lot of repetitive play and banged things together. As an infant, he had plagiocephaly; he wore a helmet and had physical therapy. “His first couple of years, he was a trouper,” his dad said.

Over the next few years, Greyson received occupational and physical therapy. At first, he had one-on-one support in school, and he has always had an Individualized Education Program (IEP). 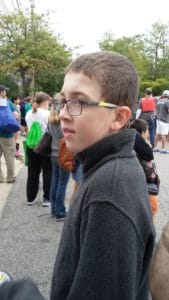 Greyson at the 2017 Triangle Run/Walk

Now, he is 13 and has made the honor roll in mainstream classes at Mills Park Middle School in Cary, where his mother, Jan, teaches. “We work really, really, really hard at school,” Kevin said. “I think Greyson’s a role model of what therapies and intervention can do. He has come a long way.”

At church, Greyson enjoys working with children who have disabilities and need support. “Children gravitate towards him. He is amazing at calming down upset children by being silly or just through his interaction,” Kevin said. “He’s always looking to help people.”

He loves leading his team of friends and family at the Triangle Run/Walk for Autism each year, where they all wear shirts that say Racin’ for Greyson. “We do love Greyson having his own day,” Kevin said. 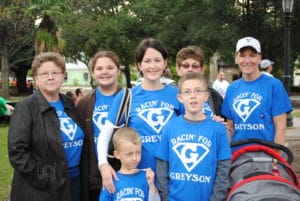 Part of the 2015 Racin’ for Greyson team

When asked whether what he would tell others about attending the event, he said, “Do it! It’s amazing. It’s the best thing in the world. You get to have a good time there and see all the other people.”

He didn’t always feel that way. When he was about 8 or 9, Greyson didn’t understand why everyone was wearing shirts with his name. He didn’t like the focus on him, Kevin said. But then his parents started talking to him about autism, and his attitude changed.

Now, Greyson is outspoken about his autism and likes to tell people about it. “The biggest thing for us is for him to be aware,” Kevin said. “I feel like he can be an inspiration for folks.” 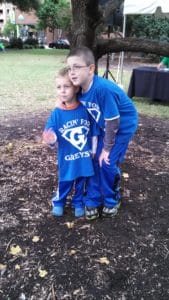 Greyson and one of his brothers at the 2013 race

The family also participates in the Triangle Run/Walk for Autism in hopes of increasing awareness. They want people to pause before judging people who might act differently from themselves. Kevin hopes that learning about autism will make people be more patient and understanding when a child has different social skills.

They also think it is important to support the Autism Society of North Carolina, which Kevin said does “awesome work.” They typically bring a team of 20-30 people, and raise $1,000-$2,000 a year. Kevin also brings a team for the Camp Royall Classic golf tournament each spring, which raises money for camp scholarships.

For Greyson, they dream of independence. “I see him working with kids, driving, living on his own – with his doting mom and dad checking in on him, of course,” Kevin said. “That’s every parent’s dream.”

Step out to improve lives in 20th annual Triangle Run/Walk for Autism on Saturday, Oct. 13! The event in downtown Raleigh will include a USATF-certified 5K race, which is part of the Second Empire Grand-Prix Series; a 5K noncompetitive run; a recreational 1-mile run/walk; and a kids’ dash. Celebrate autism awareness and acceptance with a kids’ play area, music, refreshments, and vendor space that will showcase local businesses, service providers, support resources, and sponsors. Proceeds will fund local programs of the Autism Society of North Carolina.