WNC Run/Walk for Autism is Chance to Share Their Story

Wyatt Ogden was not diagnosed with Autism Spectrum Disorder until he was 7 years old. He had been referred for an autism evaluation by his preschool when he was 3, but he was high-functioning, and his parents did not want to limit him with a label.

But Wyatt had some challenges in elementary school, and his parents soon realized that the label of autism would actually help Wyatt receive the supports he needed for success. 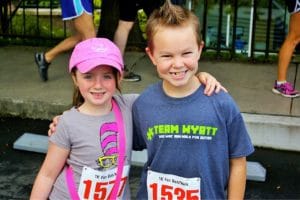 “We’ve done a 360 from not wanting the ASD label to wanting the whole world to hear our story,” said Wyatt’s mom, Kristy Barlow.

For the Asheville family, participating in the Autism Society of North Carolina’s annual WNC Run/Walk for Autism is part of sharing Wyatt’s story and raising autism awareness.

“We know it’s a challenging journey raising a child on the spectrum. We have been so thankful for the resources that Wyatt has received over the years and want to help other kids on the spectrum have access autism resources, too,” Kristy said. “We advocate, educate, fight, and raise awareness every single day, and every year, this race symbolizes that for us.”

The family has participated as Team Wyatt for the past four years, raising more than $5,000 to support local services and resources provided by the Autism Society of North Carolina (ASNC). They wear “Team Wyatt” shirts made by a company called SpecialTees, which employs people on the spectrum.

This year, the family aims to raise $2,500 through donations and the team of “awesome” friends and family who will run or walk with them on Saturday, Sept. 9, in Carrier Park.

“Race day is amazing. It is filled with great energy, laughter, and autism love,” Kristy said. “We started off with a team of five and grew into a team of about 35-40 last year. It touches our hearts to see all our friends and family come together for this event.” 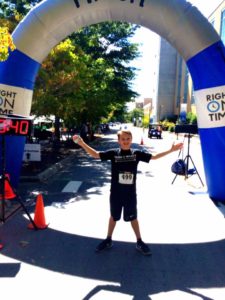 Wyatt, who is now 11 years old, enjoys that the Run/Walk is “autism-friendly,” with less noise and vendors that offer sensory-friendly activities. “Wyatt is the ultimate sensory kid. He is extremely sensitive to sound, touch, and overwhelming, crowded environments,” Kristy said.

But Wyatt “is the most amazing person in the world,” his mom said. “I know I am biased… but seriously.”

“What you may think are small feats in life may be the biggest victory in ours. There is nothing better in this world than watching your kid overcome his challenges and achieve something he’s worked so hard to do, like being in the regular classroom for an hour or making it through the holiday parade. Those are the little/big things that keep us fighting and advocating!”

Step out to improve lives in the 12th annual WNC Run/Walk for Autism at 9 a.m. Saturday, Sept. 9! The event at Carrier Park in Asheville will include a 5K race, a recreational 1K run/walk, activities for children, music, and refreshments. Vendor space will showcase local businesses, service providers, support resources, and sponsors. Proceeds will fund local programs of the Autism Society of North Carolina.