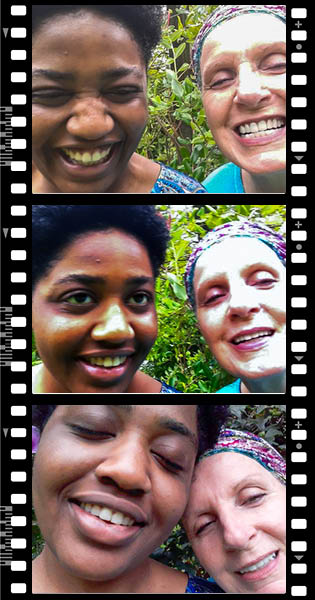 During her career as a special education teacher in Pitt County, Beth Strathern helped countless children with autism. But it’s her special 20-year relationship with Shala Bell that made Beth the 2020 winner of the John and Claudia Roman Direct Service Award. The annual award honors a direct service employee of the Autism Society of North Carolina who has demonstrated outstanding dedication to individuals with autism and their families.

Beth first met Shala and her mother, Teedra, when Shala was placed in Beth’s preschool class. “I was a young parent who had a child with a condition I knew nothing about,” Teedra recalled. “Beth took me under her wing and educated me on the services Shala needed. She helped me get through some tough times.”

“One of my goals, as a teacher, is to show children they can trust me,” Beth said. “One of my earliest memories of Shala is her allowing me to hold her for a minute in the rocking chair I had in my classroom. It was a way to feel the trust we were building. Once we had that trust, then we could pave a road for her to communicate, to feel safe in the world.”

After Shala graduated from preschool, Beth was asked to provide direct support for her for an additional two weeks, until another professional could be found. Eventually, everyone realized, the best match for Shala’s needs and challenges was Beth, and that two weeks turned into two decades.

“Initially, I was disheartened that they couldn’t find another support person for Shala,” Beth said. “People were giving up before they gave her a chance. But now, I can’t imagine life without her. I’m never losing her. We are each other’s sidekicks.”

“Beth is the reason why Shala met so many of her goals,” Teedra said. “She’s always working on Shala’s goals relating to personal care, education, and independence.”

“We’ve worked through challenges and struggles in many areas of development,” Beth said. “But Shala never gave up on any task. I have so much joy in seeing her achieve her goals, express her thoughts, and have a sense of pride in herself.”

With a relationship that spans 20 years, Beth and the Bell family share many memories. Teedra remembered how Beth brought Shala to the hospital shortly after Teedra had her second child. “She took pictures and created memory books for us,” Teedra said. Beth remembered that visit for how uninterested Shala was in a baby, but she also recalled how, a few years later, Shala guided her toddler sibling away from a hot oven. Teedra said she’ll never forget seeing Shala in a garden with Beth, and Beth said that the duo’s current favorite hobbies are dancing, singing, and making up funny songs.

For Teedra, Beth has been an essential help to her family beyond the work she did with Shala in the home. “We could call Beth at all hours, and she would guide us through what to do. She was off the clock, and she didn’t have to take those calls, but she always answered.”

Beth has also been vital in helping Teedra through meetings with schools and doctors: “I didn’t know the language of autism, but she did,” Teedra said. “When I don’t know what to say, she steps in and is my advocate. More than anything, that’s what I admire.” Teedra works in the school system and is hoping to work more closely with exceptional children after seeing the work that Beth has done with Shala.

Beth, who retired from the classroom six years ago, says she’s grateful for the resources in Pitt County that made her work with Shala possible, from her fellow teachers to the parent support groups. She had been determined to teach individuals with autism since the time she was 15 and had the chance to visit a residential center.

“Every child has an infinite capacity to learn and grow, beyond a diagnosis. I never get tired of seeing a child learn something, and I don’t think I ever will,” Beth said. “I cherish that opportunity to be there when a person makes those connections. It’s more than a job. It’s a privilege.”