Young Musicians Donating Concert Proceeds to Help Others on the Spectrum 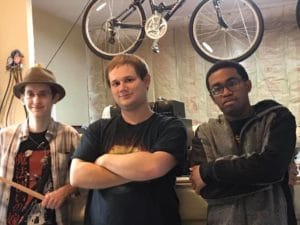 Seventh Judgement played its first gig last April in Charlotte. The three members of the band – all men in their 20s – weren’t expecting much. They were the opening group in a show that featured five other heavy metal bands.

But the crowd loved them, moshing and waving pool noodles. They were called back for two encores. “It made me feel quite giddy,” said drummer Phillip Tackett. “It was humbling in a way. We couldn’t have been more happy with the outcome.”

In fact, Seventh Judgement got the biggest reaction of the night, said Jacob Karvonen, lead singer and guitar player.

On Friday, Oct. 25, the band will be back at OSO Skate Park for another multi-band show. This time, they are the headliners and have chosen to donate proceeds of ticket sales to the Autism Society of North Carolina.

Two of the three young men in Seventh Judgement are on the autism spectrum: Jacob and Menelik Cannady, who plays keyboard. They have all played music since childhood. Jacob, who is 23, said being on the autism spectrum helped him progress in music. “The things I was interested in, I would be obsessed over,” he said. “Because of that, I was more driven to learn more.” He began learning the guitar when he was 10 with his father but also taught himself by looking up how to play certain songs and through practice.

Phillip and Menelik both began playing music with piano as young children. Phillip, who is 25 now, said he was mostly self-taught on the drums. He started playing when he was a teenager and his father got a drum set. Over the years, he also played bass guitar but switched back to drums for Seventh Judgement. Phillip also studied music in college. Menelik competed in classical piano as a child, earning many superior ratings. He eventually learned he could play by ear and began composing his own songs. Now, he is a junior at Queens University, studying music therapy.

The young men chose to benefit the Autism Society of North Carolina with their latest gig because they wanted to do some good alongside writing music and making a name for themselves, Jacob said. “Right now we’re not doing it for the money.”

“Some songs we write individually, others as a group,” Jacob said. “Some of our songs are more personal.”

Each of the young men has a day job, but they’ve committed to getting together each Saturday morning to “mess around” and play until they find something that sticks out, Jacob said. “Phillip will throw up a beat, I’ll start playing along with it, and then Menelik will join in on the keyboard.”

They often come up with three or four good melodies per session as they throw out ideas, Jacob said. Phillip said the fact that the three of them come from different musical backgrounds can be helpful. “When the three of us come together, it’s almost a clashing of ideas, but we find what each of our strengths are. Our best bet is to put in a healthy mix of all of our likings.”

They hope eventually to record an album. “We have big dreams for this band but we’re also trying to set our earlier goals lower,” Jacob said. “We’re all driven.”

Phillip agreed. “We’re trying to make this run as long as we can. We want to persist.”

Seventh Judgement and guests will perform at OSO Skate Park on Friday, Oct. 25, to benefit individuals with autism and their families. Doors open at 6 p.m., the show starts at 6:30 p.m., and it is expected to end about 10 p.m. Tickets will be $7. The park is at 933 Louise Ave., Suite 109, Charlotte.

Learn more about Seventh Judgement on the group’s Facebook page.