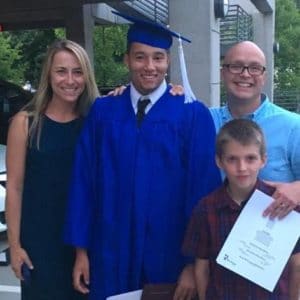 We are happy to introduce Michael LePage as the Autism Society of North Carolina’s Western Regional Director. Michael brings with him a wealth of knowledge from a 20 year career serving individuals with intellectual and/or developmental disability (IDD) and their families, largely focusing on Autism Spectrum Disorder (ASD). He returned to ASNC in his new role as Regional Director at the end of 2017, having already held a lengthy tenure with us in residential programming development.

Michael graduated from Worcester State College in Massachusetts with a BS in urban systems and a focus in social work in 1998. He entered the IDD field as a behaviorist for a day program in Massachusetts. Michael moved to Western North Carolina in 2000 and was first employed in the Asheville community as a Prevocational Classroom Manager at Blue Ridge Homes Day Program. There, he found himself specifically drawn to the unique needs of individuals on the autism spectrum.

In 1999, Michael began working with WNC Group Homes for Autistic Persons as a House Manager/QP. He then became the QP Supervisor, overseeing five homes with 25 residents. He worked for ASNC from 2005 to 2015. During that time, he collaborated with families to create a family-driven residential model and provided oversight to our residential program. Michael then served as a Care Coordinator with Vaya Health, helping families to access and navigate services.
Michael has enjoyed his return to ASNC and again being a part of our committed team. His dedication, experience, and strengths will benefit the entire ASNC community: the individuals we serve, their families, and our staff. Michael resides in Asheville with his wife and two children. He enjoys running, competing in OCRs (Obstacle Course Races), and spending time with family, friends, and his dogs.

Michael LePage can be reached at mlepage@autismsociety-nc.org.