by the Autism Society of North Carolina

The McCrimmon Award is named for Ed McCrimmon, a longtime member of the Autism Society of North Carolina staff. He was known for his outstanding dedication and integrity as he served individuals with autism. Tragically, he died in 2017. The McCrimmon Award was established to keep Ed’s memory alive, and at the same time, celebrate others like him who give their heart and soul in providing critical care to individuals with autism. This award is sponsored by Rob and Jennifer Christian.

This year, three direct support professionals — Becca Martin, Kaitlin Warren, and Angela Wideman — were chosen to receive the McCrimmon Award for their outstanding work. Learn more about their impact, directly from the people who nominated them: 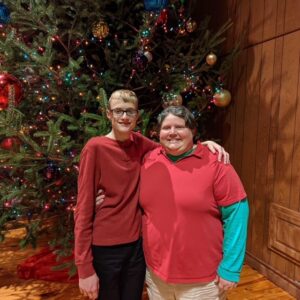 My son’s direct support professional is a gift from God. Becca is truly remarkable in every way. She has been sharing her love for special needs children with our family for 15 years. Not only is she our DSP, but she is also an elementary school special education teacher and co-chair of the county’s Special Olympics program. Becca came into our lives at just the right moment, shortly after we adopted our son in 2006. We bonded and attached instantly, and Becca has been a part of the family ever since. They are best friends! Becca goes above and beyond in her work with our son on a daily basis. She supports us in teaching our son to be the best he can be, implementing modifications that make his goals achievable. Through her hard work and dedication, Caleb participates in many activities such as a part time job, recreational programs, and various other community events. She works alongside us in using ASL and picture schedules to best support our son. Together, we are teaching him how to be as self-sufficient and independent as possible by acknowledging his strengths. As he transitions into adulthood, he is also learning self-advocacy and healthy boundaries with her help. Without Becca’s support, Caleb would undeniably not be where he is today. With Becca’s support, the possibilities are endless! 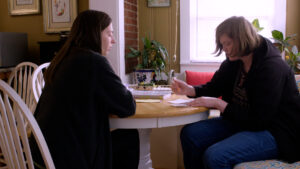 Kaitlin had only been working with my daughter Caroline a few months when the COVID pandemic hit. Caroline has profound learning disabilities as well as autism. She had to drop out of school as she can’t learn online. As a result, Caroline was very depressed and felt worthless. Kaitlin helped Caroline believe in herself by not only encouraging her but establishing small incremental goals with visual aids to measure Caroline’s progress and achievement. Kaitlin is excellent, she pushes Caroline just the right amount to improve her skills. Kaitlin made visual aids for Caroline to use as a guide (for example, how to wash her clothes) and established a schedule to do things. Being able to demonstrate adult behavior skills has resulted in improvement in Caroline’s behavior. Caroline got a job as a dishwasher but struggled to do the steps correctly. Kaitlin went to work with Caroline and learned each step of Caroline’s job. Kaitlin provided on the job coaching to Caroline and made Caroline visual aids for completing each step. Caroline has been successful in her job for over a year now and her self-esteem has improved exponentially! The girl who felt worthless now makes a salary, has learned to follow a budget (another Kaitlin accomplishment) and loves to shop for bargains! Kaitlin has encouraged Caroline to eat healthy and exercise. Caroline use to hate it but now she even initiates running with Kaitlin. Kaitlin is outstanding! She is dependable, and she goes above and beyond. She has helped Caroline believe in herself! A priceless gift! 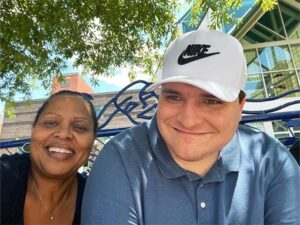 Angela is Bobby’s person. Angela has everything you need to be a caregiver. She’s loving, patient, positive and confident. She has a huge heart and Bobby loves her. Angela treats Bobby with respect and she expects everyone else too as well. She helps Bobby be all he can be. She encourages him to try new things and rewards him when he does well. But the most important thing is Angela loves Bobby. I never have to worry when she has “The Bob.”

Angela Wideman is not my son’s direct care worker. That is what makes her even more extraordinary. We met Angela on our first visit to check out the supported living house. She has been Bobby’s one-on-one caregiver for years. During visits, Angela would be there with Bobby, but she let us know that she would also be looking out for my son Matthew when he moved into the house. She said she considered the boys at the house like her sons, and that we could rest assured that Matthew would be well taken care of. She gave me her cell phone number and told me if we had any concerns or wanted to know how Matt was doing, we could call her. On his birthday, she gave Matthew a gift card to his favorite restaurant. She genuinely cares about Matthew, and we feel so fortunate to have someone like Angela in Matthew’s life. I can’t adequately put into words how much her thoughtfulness and her caring nature has meant to me, as Matthew’s mom. She obviously goes above and beyond her job description.