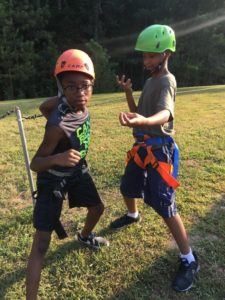 Kellington and Khalil show off their ninja moves.

The 11-year-old arrived for his first week ever somewhat nervous and talking low, his counselor said. But then he was introduced to Khalil, and within minutes, the boys were off walking and talking about Ninjago, their favorite show. “I feel like Kellington and Khalil had been friends forever throughout the week the way they were together,” said Counselor Natassja Bulluck, who is majoring in kinesiology at UNC Greensboro.

Kellington’s mom, Kenyatta, said the boys had a lot in common, sharing interests in the same movies, shows, and activities. “They are both friendly. They just enjoy life.” They even had the same style of glasses.

At Camp Royall, the boys loved to play basketball in the gym and do arts and crafts. Kellington enjoyed crafts that used video-game themes and those that he could make and wear around camp, such as the camp necklace, Natassja said.

The friendship granted Kenyatta’s hope for Kellington’s week at camp. “It’s very hard for him to make friends,” said his mom, Kenyatta. “There is sometimes a certain degree of social awkwardness.”

Kellington was diagnosed with autism when he was 18 months old. Within days, his mother had started him on 40 hours a week of therapy: speech, developmental, occupational, and Applied Behavior Analysis. “I ended up leaving my job just to ensure that he was getting everything he needed,” Kenyatta said. “They said he would never be verbal or function past an 18-month level.” He started speaking when he was 4 years old.

“It was all worth it and it still is,” Kenyatta said.

Kellington now attends a school where about 50 percent of the students have a disability, she said. He is in mainstream classes, and “they meet him where he is. There are times where he definitely has to work harder than his peers just to grasp different concepts and social cues,” she said.

But she has raised Kellington not to think of himself as different, she said. “I wanted him to know that there was absolutely nothing he can’t do.”

Camp Royall has helped Kellington continue to build that confidence. “I saw Kellington do so many different and new things at camp that he had not been brave enough to do outside of camp,” Kenyatta said. 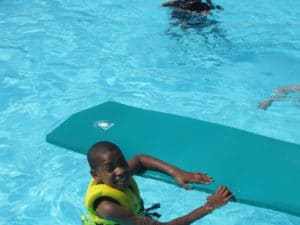 In fact, on the last day, Kellington and Khalil were brave enough to showcase their hip hop moves in the end-of-camp show. “They wowed everyone, including me,” Natassja said. “I had no idea that they would be so great.”

They wore ninja headbands that Natassja had made for them since they both loved Ninjago. “When I showed it to them the next morning it was like Christmas! They both loved the ninja bands and wore them all around camp.”

After the show, Kellington and Khalil played together in the gym up until it was time to leave camp. Kenyatta said that usually, Kellington sticks right by her side, but that day he ran off without hesitation to play ball.

“By the end of the week, Kellington had blossomed and had so much energy,” Natassja said. “I think it was because of his friendship with Khalil. Once he found his, and I quote, ‘best friend,’ he was this amazing kid who I had the pleasure of seeing at camp and have such a good time.”

Since Kellington has been home, his mom can also see a difference in him as he tries new things – even calamari! “I just saw a different child. It was a very good thing.” 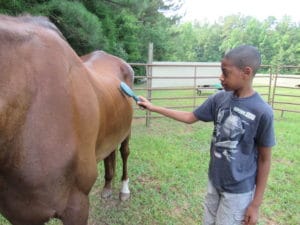 He also has been able to attend movies with his family, which he couldn’t do before. In fact, while Kellington was at camp, Kenyatta and his younger brother went to a movie because they usually could not. She said the opportunity to have one-on-one time with Kellington’s brother, while not worrying about Kellington, was “so very important.”

“He was in the best hands. Just to not have to worry and have peace of mind, was a blessing,” she said. “I am just eternally grateful for the Autism Society of North Carolina. That a place like this exists is just such a blessing.”

The family plans to return to Camp Royall as much as possible, Kenyatta said, perhaps for the very next Family Fun Day. She also hopes that Kellington and Khalil can attend camp together next year, and in the meantime, they will keep in touch and hope to plan visits.

“I’ve never seen him have that connection outside of his little brother,” she said.

We look forward to seeing these two best buddies again at Camp Royall!