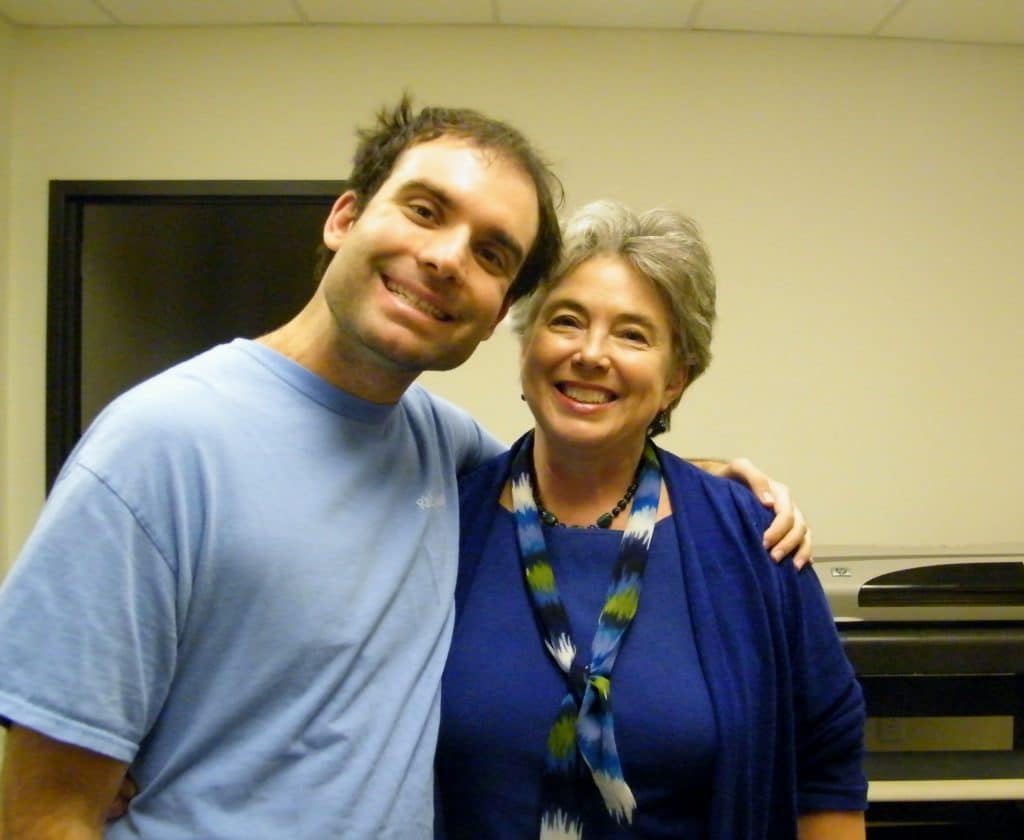 David Roth’s parents never have to wake him up in the morning or push him to get out the door on time for his job. The 27-year-old with autism works at the Courtyard in Chapel Hill, mostly in the fast-paced, physically demanding laundry, but he is always happy to go.

“He loves to work. He absolutely loves it,” said his mother, Susan Roth.

David started working at the hotel when he was still in high school. It was a volunteer position, facilitated through East Chapel Hill High School, where the young man was having some behavioral issues when he was made to do things he did not want to do. “He was absolutely the happiest when he was out in the community and especially when he was at his job,” Susan said.

Now, almost a decade later, David holds a paying position at the Courtyard along with two other part-time jobs, with the support of an employment supports instructor from the Autism Society of North Carolina (ASNC). His mother says the jobs have helped him learn how to interact with other people, provided the consistent schedule that he needs, and given him pride and a sense of accomplishment. They have even improved his reading skills because he is interested in reading about his job duties as opposed to school topics.

Lorraine La Pointe’s 25-year-old son with autism, Adam Ricci, also holds several part-time jobs. She says they have “opened up his circle”; when she is with him in the community, he always sees someone he knows. She also noticed that Adam has recently matured. “I think it really has changed him.”

Kathryn Lane, who is Adam’s employment supports instructor through ASNC, agrees, saying that Adam is calmer on the job than at other times. Having a job has also taught him responsibility as it requires him to be punctual, have clean, neat clothing, and manage his time as he completes tasks, she said.

“Seeing the progress is really rewarding for me,” Kathryn said. “The goal is to make him independent someday.”

For individuals with Autism Spectrum Disorder (ASD), meaningful employment is a key part of a fulfilling life, but studies have shown that as many as eight out of 10 are unemployed or underemployed. David Ingram, ASNC Employment Supports Director, said that individuals with ASD improve their odds of obtaining integrated employment 400% through using job placement services from an organization such as ASNC while using Vocational Rehabilitation supports. 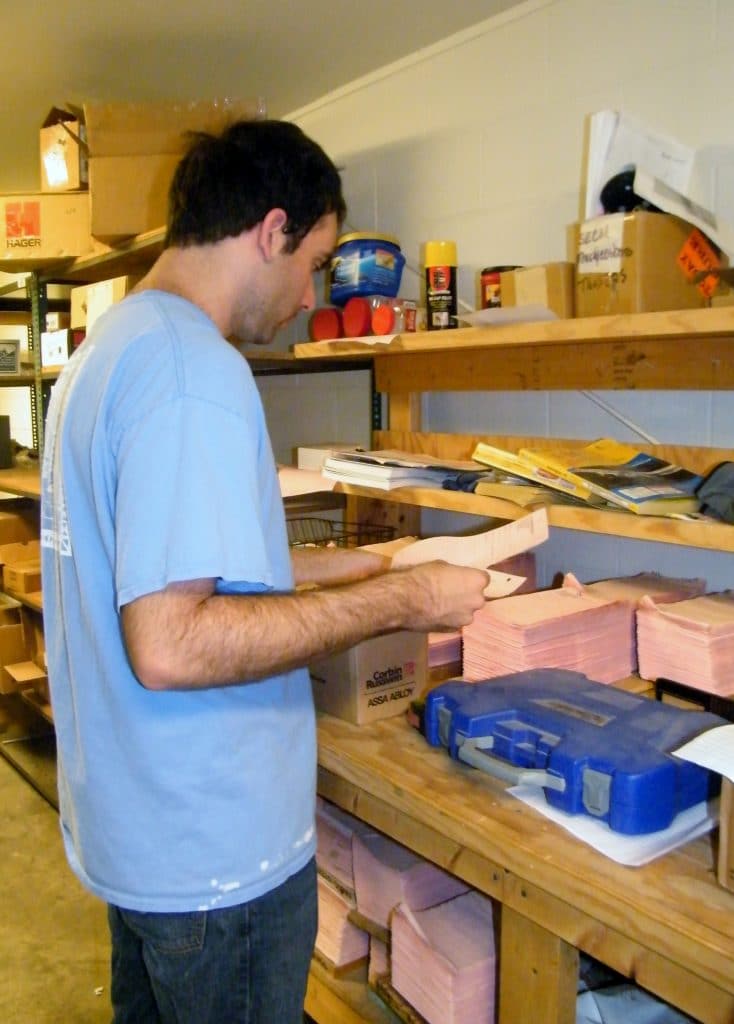 From the employers’ viewpoint, providing job opportunities for individuals with autism is a win-win situation.

“The benefits that we have with David … it actually keeps us humble, grounded, and grateful,” said Lisa Giannini-White, the Director of Operations of Southpoint Animal Hospital in Durham, where David Roth works in the afternoons. “We thoroughly enjoy having David here.”

Terry Hamlet is President of S.H. Basnight and Sons, a small Hillsborough company that makes specialty hardware, doors, and frames. Terry said she and her employees benefit from working with Adam and another employee with autism. “I think that at the core of each person, they like the idea of doing something for other people. I think that in some way, that is happening here,” Terry said. “Hopefully they can feel good about the fact that they work for people who care enough about other people to give them an opportunity.”

Lisa said it was a part of Southpoint Animal Hospital’s original business plan to “offer opportunities to everybody.” Before David came to work for them, she did research about how to support individuals with autism and also consulted with his father about David in particular. When she talked to her employees about bringing David on, they were all for it, she said, and so she shared what she had learned.

But it’s not just about a feeling they are doing good; David is a valued employee, a consistent team player with great attention to detail, Lisa said. “He helps others see that well, gosh, I guess I could be more detailed, or I guess I could be a little bit of a harder worker.”

Alex Griffin also brings strong attention to detail to his position at the Center for Urban Affairs and Community Services (CUACS) at NC State University. Alex, a 30-year-old with high-functioning autism, does not need the assistance of an employment supports instructor, but he did participate in ASNC’s JobTIPS program, which emphasizes the development of social skills that are critical to identifying, applying for, securing, and maintaining employment. The group facilitator provides coaching and feedback for job interviews, encourages peer interaction, and helps members develop a broader community network.

Sheila Brown, Alex’s supervisor, said he does not really need supports at CUACS and performs well in a variety of duties. “He’s got a great attitude, and everything he’s done for us he’s done very well, very thoroughly,” she said. The reviews of assessments and testing that their work group do can be tedious and require a lot of attention, and Alex has found things they might have missed, she said. He also is very responsive to feedback and happy to do anything that is asked of him.

Alex said he would like all employers to know that “our value as employees isn’t overshadowed by the minor cost of accommodation.”

David Ingram said, “Individuals with disabilities, including ASD, experience less turnover than nondisabled individuals, allow access to numerous tax incentives, and return an average of $28.69 for each dollar invested in accommodations. Individuals with disabilities and their networks represent a $3 trillion market segment, and 87% of customers prefer to patronize businesses that hire employees with disabilities. I’m excited to see businesses starting to understand the value in hiring workers on the autism spectrum and contact us seeking support in placing someone with ASD with their corporation.” 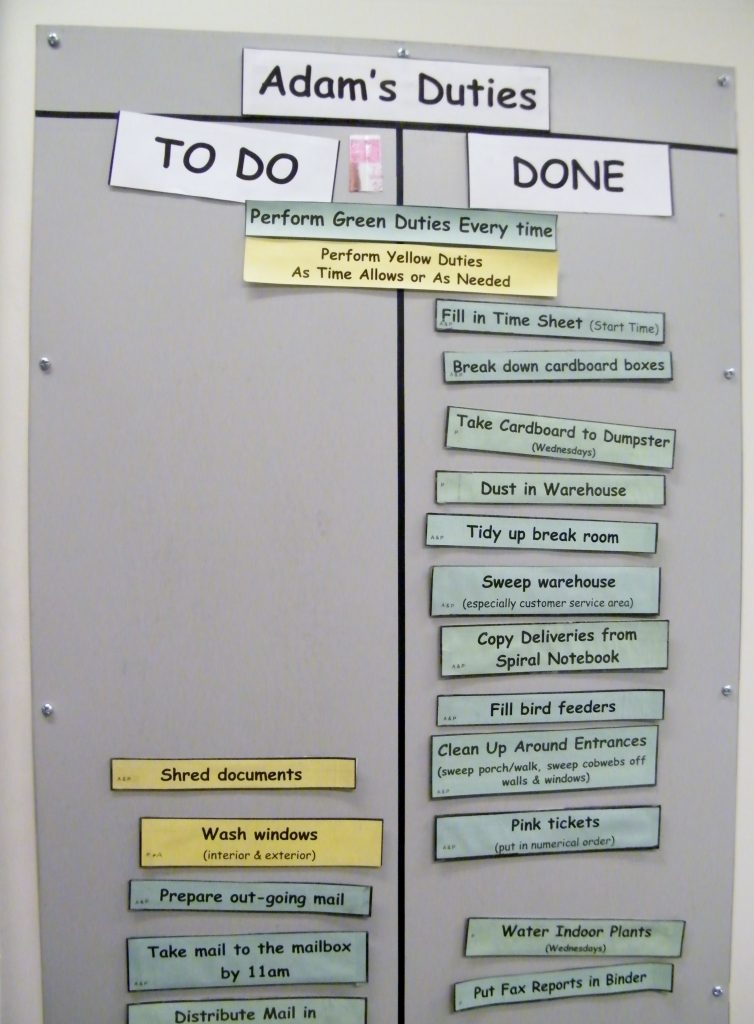 S.H. Basnight and Sons’ employees with autism are productive parts of the business because Terry matched tasks that the company needed to have done with their skills, just as she would with any employee, she said. Having patience and teaching how to complete tasks properly is necessary with any worker, she said. “There is no employee ever that is totally easy. The key is to work with people to help them do things correctly.”

Adam’s mother, Lorraine La Pointe, said Basnight has done an “amazing” job of supporting him. “They are just naturals. He operates on a visual schedule, and they have magnetic boards set up for his tasks. They are just on it.”

The visual task boards give Adam the opportunity to choose the order in which they will do the tasks for that day as well the independence to move from one task to another, Terry said. At Southpoint Animal Hospital, Lisa also set up visual supports for David, such as laminated sheets showing his duties in the restrooms.

Terry also said that employment supports instructors are a key to success for individuals with autism. With the job coaches supporting their clients well, there is more potential for growth in the job. Kathryn Lane, who has worked with Adam since July, said she has seen that; he has started recognizing more details at his job and times that tasks were not done correctly.

Part of the team

For employees without onsite support staff, many issues can be avoided with just a little research about autism and the employee in particular, said Sheila Brown, Alex Griffin’s supervisor at NC State. “We tend to have a stereotypical picture of what autism is, but it’s really more what autism is not,” she said. “Just be open, trying to make sure that the person is comfortable with what you’re asking them to do until they feel a comfort level with you and your staff.”

Adam feels very comfortable with his Basnight co-workers and Terry Hamlet; when he sees her in public, he greets her with a hug. She said they strive to make him a part of their team. Adam’s mother said they have gone a step further, including him in parties for holidays and birthdays; “they treat him like family.”

Terry says the effort was worth it.

“My life and the life of our company is richer for having had them here. I really believe that.”

For more information about Employment Supports, please go to www.autismsociety-nc.org/employmentsupports